The original Parker 51 set the standard for form and function for over sixty years and now sixty years after the launch of the original the new "51" takes an original pen steeped in history and combines it with cutting edge technology.

The new Parker 51 Special Edition brings back the intense pleasure of writing with an elegantly understated pen. Balance, precision and flow are inherent in its design. State of the art technology has been embraced to create a pen that produces a smooth, flowing and consistent line every time the pen touches paper.

The cigar shaped barrel as available in either deep glossy black or vista blue. The finish of the cap on the black pen is two tone; 23 karat plated on white metal, whilst the vista blue pen has an all white metal cap.

The Parker 51 Special Edition pens are contained in a stunning presentation box, and are accompanied with historical information, a deluxe cartridge converter, polishing cloth and the usual Parker manufacturer's guarantee. 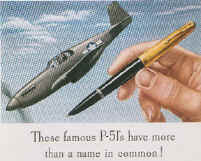 Launched in 1941, the Parker 51 is considered by many to be the forerunner of the modern pen. In 1950 it received recognition as a design landmark and was awarded the Design Academy Award. 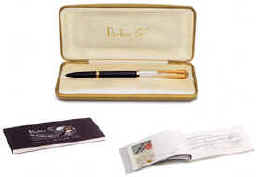 In keeping with modern technology, the 18 karat gold nib is fed by a precision twin channelled, ink feed and collector system. The original filling system has been replaced by a twist-action refillable ink cartridge.

A special pen deserves to be presented in a special box. The Parker 51 Special Edition is supplied in a gift box manufactured in a style and in materials very similar to the original Blue Diamond 51 pens.

This is a pen that will appeal to those for whom timeless, classic design has high appeal and give gifts that are thoughtful, in excellent taste, have intrinsic value and which can be used for a lifetime.