The Parker Duofold and Sonnet Accession fountain pens and ball pens were created in 2002 to celebrate the Golden Jubilee of Her Majesty Queen Elizabeth II. When King George VI died his eldest daughter, Princess Elizabeth, immediately succeeded him. Seventeen months later, on the 2nd of June 1953, the new Queen was crowned in Westminster Abbey as Her Majesty Queen Elizabeth II.

The Parker Duofold Accession is a limited edition of 2500 individually numbered pens, fully overlaid in heavy 23k gold plating. The barrel and cap are repeatedly engraved with the commemorative text "Queen Elizabeth II by the Grace of God, Queen of the Realm and of Her other Realms and Territories, Head of the Commonwealth, Defender of the Faith".

The Duofold Accession fountain pen has a precision ink feed and collector. The cap is mounted with a 1.5 karat amethyst. Find one of these now rare pens for sale here.

The Parker Sonnet Accession Special Edition is a pen for those who love to write. 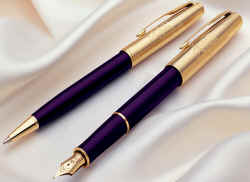 The fountain pen has a precision ink feed system and a 23k gold plated nib.