This limited edition Pen of the Year 2015 was inspired by the architecture of the Palace of Sanssouci which was built according to plans by Frederick II. Created by the hands of a skilled master craftsman the creation of these fountain pens demands the highest standards of craftsmanship. For the POTY 2015 Graf von Faber-Castell commissioned the Herbert Stephan gemstone workshop. This workshop carries on the tradition of the Idar Oberstein gemstone workshop which dates back to the 15th century. The workshop's masters demonstrated their unparalleled skill whilst working on these limited edition pens. Its platinum plated barrel and cap are adorned with four green Silesian percious serpentine gemstones and a Russian smoky quartz gemstone, both ground and polished by hand. The special edition version is 24k gold plating with green serpentine and rare chrysoprase, Frederick's favourite natural stone. Chrysoprase has not been mined for many years and is now only available on the antique gemstone market. The special edition is limited to 150 fountain pens and 30 rollerball pens. The platinum plated fountain pen is a limited edition of 1000 fountain pens and 300 rollerballs. Every pen is individually numbered and comes in a highly polished, laquered black wooden box and includes a certificate confirming the authenticity of the natural stones. The wooden gift box can also be used as a collectors case because a second insert has room for an additional six more pens.

Russian quartz inserted into the top of the cap. 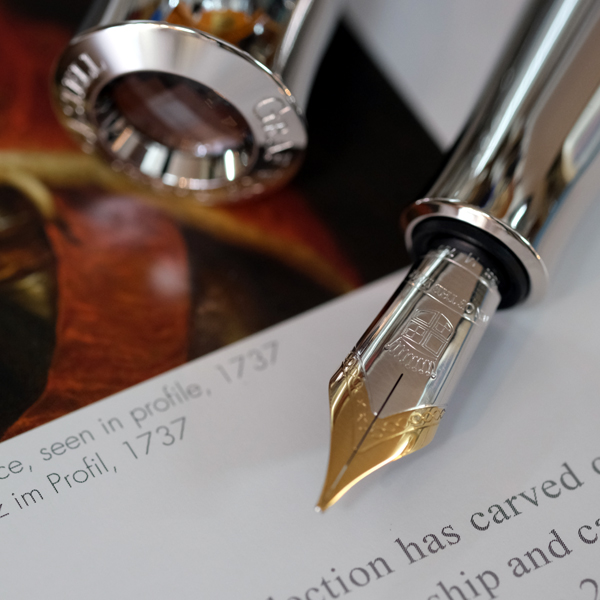 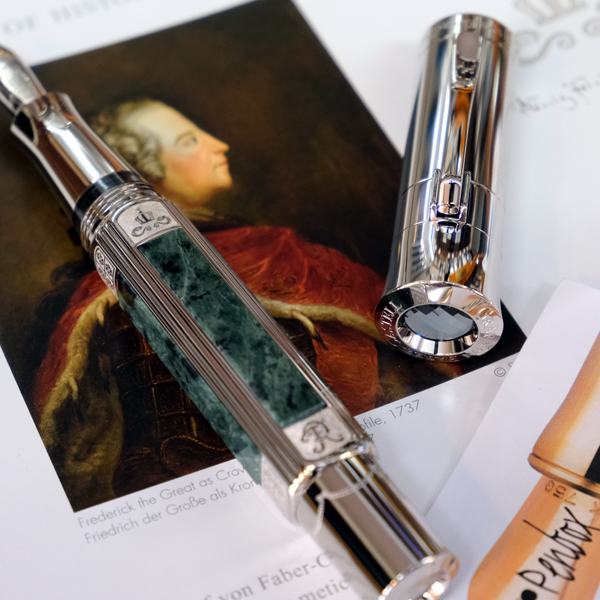 One available fitted with a medium nib.

The Graf von Faber-Castell Sanssouci Potsdam Pen of The Year 2015.