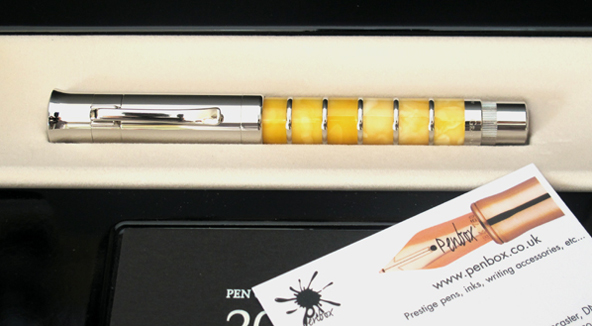 A Pen Of The Year 2004 fountain pen from Graf von Faber Castell in amber and platinum with an 18crt two tone medium nib. This example is new old stock that has remained in our stock room since circa 2005 and is complete with its box, papers, unmarked guarantee card, and outer sleeve. These limited edition fountain pens from 2004 have not been available from GvFC for many years and this is an opportunity to purchase an as new and uninked example of this now desirable and rare fountain pen. 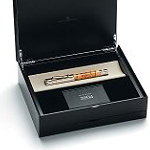 Amber is fossilised tree resin appreciated for its natural beauty and used in the manufacture of many decorative objects. 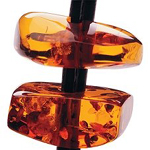 Who better to manufacture the 2004 Graf von Faber-Castell Pen of the Year than the restorers of the Amber Room in the Catherine Palace near St Petersburg. Construction of the Amber Room began in circa 1701 and it was originally installed in the Charlottenburg Palace and later moved to the Catherine Palace in 1755. The Catherine Palace and the Amber room were looted and destroyed during WWII and in order to recreate this showpiece in its original splendour, a team of the very best craftsmen, artists and architects were assembled and completed the replica room in 2003. It was one these same master craftsmen who took the lead in the creation of the Graf von Faber Castell Pen of the Year 2004 fountain pen in amber.

One example only available of this desirable pen (new and fully boxed).

Sold and no longer available from GvFC.

The Graf von Faber Castell Pen of The Year 2004.