For the Imperium Romanum Pen of the Year 2018 GvFC have chosen a special variety of statuario. Inserted between the marble segments of the barrel are platinum plated rings decorated with laurel wreaths. A further unusual detail is the elaborately worked cap with an engraving of the famous Colosseum and a miniature Roman penny crowning the cap top. The Roman penny in the cap of this edition is modeled on a very rare silver Roman coin from the year 44 BC depicting the head of Julius Caesar. The fountain pen comes with an 18k two tone gold nib, available in choice of nib widths of medium, fine, broad and extra broad. A platinum plated end cap conceals the rotary knob of the filling mechanism.

Each pen is individually numbered. 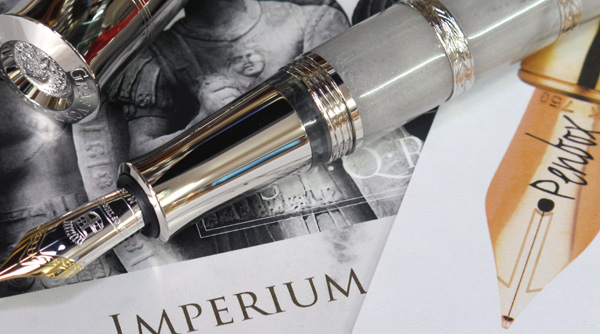 One example only with a medium nib.

The GvFC Imperium Romanum Pen of The Year 2018.