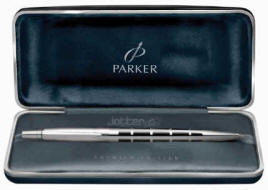 To mark the Parker Jotter pens 50th year in 2004, Parker has produced this new Premier Edition Parker Jotter pen. It echoes the original model in that it is a ballpoint pen and features a domed button engraved with the number "50". Just as with the first jotter, the clip is simplified, and doesn't feature any feathers.

Based on the original Parker Jotter Filigree, the Premier Edition Jotter features a sterling silver cap (hallmarked), button and filigree barrel. Available in two finishes - Silver & Liquorice Black and Silver & Saffron Yellow - the body is ornamented with a filigree effect, achieved by cutting a pattern into the sterling silver sleeve, and then moulding the coloured barrel with this sleeve. This complicated technique gives a beautiful result that references the square and abstract graphics so popular in the 1950s, making the Premier Edition Parker Jotter pen and its shiny black metallic gift box the last word in contemporary chic.