The umbrella was introduced from China to Japan during the Heian period AD 794-1185, and at that time it did not have the shape of a modern umbrella but looked like a fixed canopy. It was much later that it became possible to close the umbrella as with the those we have become familiar with today. The traditional Japanese umbrella is made of natural material such as Japanese paper, bamboo and wood, and today it is rarely used.

There are four Japanese umbrellas drawn in Taka Maki-e, using techniques such as raden and kirigane, with rain being illustrated by many narrow pieces of mother of pearl on the barrel and cap of this fountain pen.

The Pelikan Maki-e Japanese Umbrella is a masterpiece that combines the craftsmanship of Pelikan with traditional Japanese Maki-e. Each pen has the Pelikan logo on the crown, a limited edition number and bears the Maki-e artist’s signature who produced the pen. This limited edition pen is a numbered edition of 123. Each fountain pen is equipped with an 18k two tone nib and is packaged in a paulownia wood pen box.

If you posses this fountain pen you own a piece of artwork illustrating the skill and the aptitude of the artist and this interesting subject matter. 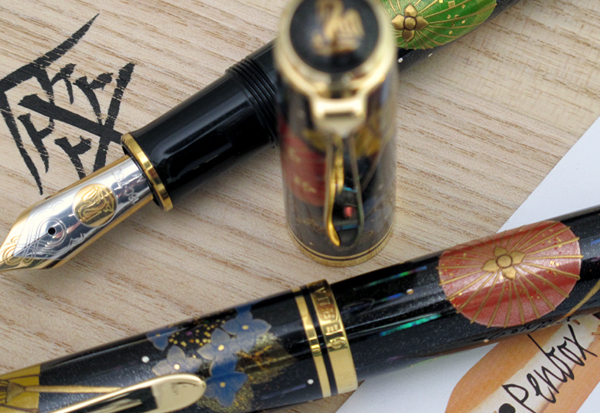