The pictures below show pencil cases and pen holders as illustrated in the Army and Navy stores catalogue from 1907, although many of these items would also have been produced in the Victorian period. Pencil lead is made of a combination of graphite and clay to add hardess and graphite deposits were first discovered in Borrowdale, Cumbria, England in 1564, where a new industry developed involving the extraction of graphite and manufacture of wood pencils. In 1858 Hymen Lipman developed the idea of adding an eraser to one end of the wooden cased pencil and quickly made a fortune. The fact that lead pencils needed frequent sharpening and were not intrinsically appealing suggested that there was a possible market for something that retained its writing point and had more appeal. In 1822 Sampson Mordan invented his Everpoint pencil with its lead being propelled by a twisting mechanism. These pencils proved very popular and S. Mordan went on to produce novelty pencils in silver and gold in the shape of a bottle, axe, sword, acorn, piglet, tennis racket, crucifix, rowing boat, owl, fish, pistol, rifle, hunting horn, screw and more besides. Production lasted until 1941 when the work shop in Cheapside, London was destroyed by bombing during the second world war. There were also many other pencil case manufacturers during this period whose pencils now form the basis of pencil collections. 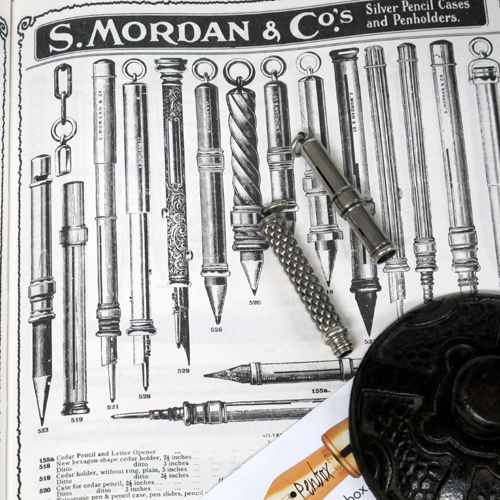 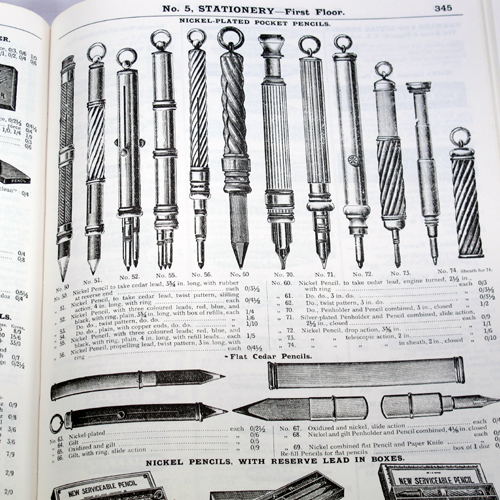 The images above were taken from the book 'Yesterday's Shopping, The Army and Navy Stores Catalogue 1907' a facsimile of the Army and Navy Stores catalogue from 1907 containing over 1200 indexed pages illustrating thousands of items retailed in the Victorian and Edwardian periods. The first edition was printed in 1969 and it was later reprinted in 1980. The pages include hundreds of illustrations of stationery items, writing instruments and accessories that would be of interest to the pen and pencil collector. The book is also a valuable resource for social historians.