A Brief History of the Parker Jotter Ballpoint Pen

In 1934 two Czechs, Frank Kliemes and Paul V. Eisen, obtained a patent for a ballpoint pen, which they named the Rolpen. In the four years between 1935 and the beginning of World War II, as many as 25,000 Rolpens were sold. However, during the war Frank Kliemes was sent to a concentration camp, and the patent lapsed.

Laslo Jozset Biro (1899 - 1985) submitted a series of improved patents in the 1930/40s which further defined the principles of the ballpoint pen. These principles would subsequently be applied to ballpoints retailing worldwide.

In 1944 Henry George Martin an English businessman, negotiated the Biro manufacturing rights outside of North America. He formed a partnership with Fredrick G. Miles who ran Miles Aircraft Ltd. The company they formed was called the Miles-Martin Co. Ltd. And in 1945 they launched their first Biro ballpoint pen. The first ballpoint they produced was manufactured from bakelite and used a copper refill unit. The refill unit had to be replaced by a Biro Service retailer. An example is illustrated below - also showing the refill guarantee. 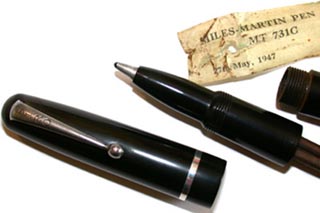 A cap actuated Parker 51 Jotter ballpoint was introduced to the Parker 51 range in 1955. It was available with both a lustraloy - stainless steel - and rolled-gold cap. Forming a trio set with the existing Parker 51 fountain pens and clutch pencils.

During the 1950s the Parker Jotter ballpoint pen underwent a number of changes. Its barrel was manufactured from plastic and it also gained a metal nozzle. The Parker Arrow clip was fitted to all Parker Jotters and in 1957 the T-Ball refill unit was introduced. Although very similar in its exterior shape, it (the refill) now had a textured tungsten carbide writing ball. Thus line quality and durability were greatly improved. Improvements in the formulation of the ink also increased the refill's write-out and performance.

In 1954 the Parker Jotter ballpoint was launched.

In 1954 the barrel was manufactured from nylon.

From 1955 the barrel was manufactured from plastic.

In 1955 the Parker 51 Jotter ballpoint was introduced. It was cap actuated.

In 1957, the Parker Pen Co. developed and added a textured tungsten ball bearing to deliver ink without skipping. The T-Ball Jotter refill was born.

In 1962 the Parker 61 Jotter was introduced. It was cap actuated.

In 1965 a Parker Jotter desk pen in brushed chrome and black was launched.

In 1973 the shape of the top of the actuating button was amended - button actuated models. Until 1973 it had been slightly dome shaped. It was now flat and carried the Parker imprint.

From 1980 the inner cap threads are plastic. They had previously been brass.